A special special thanks goes out to Likee and her relatives for arranging everything, showing us around, and inviting us into their homes. Without her I would not have taken this trip.

If you want the abridged version, here are some highlights from this trip. They are all flow consecutively in the article. Catching the inevitable third world bug, watching religion transform people, and going on a trip to a tea factory followed by a "safari". 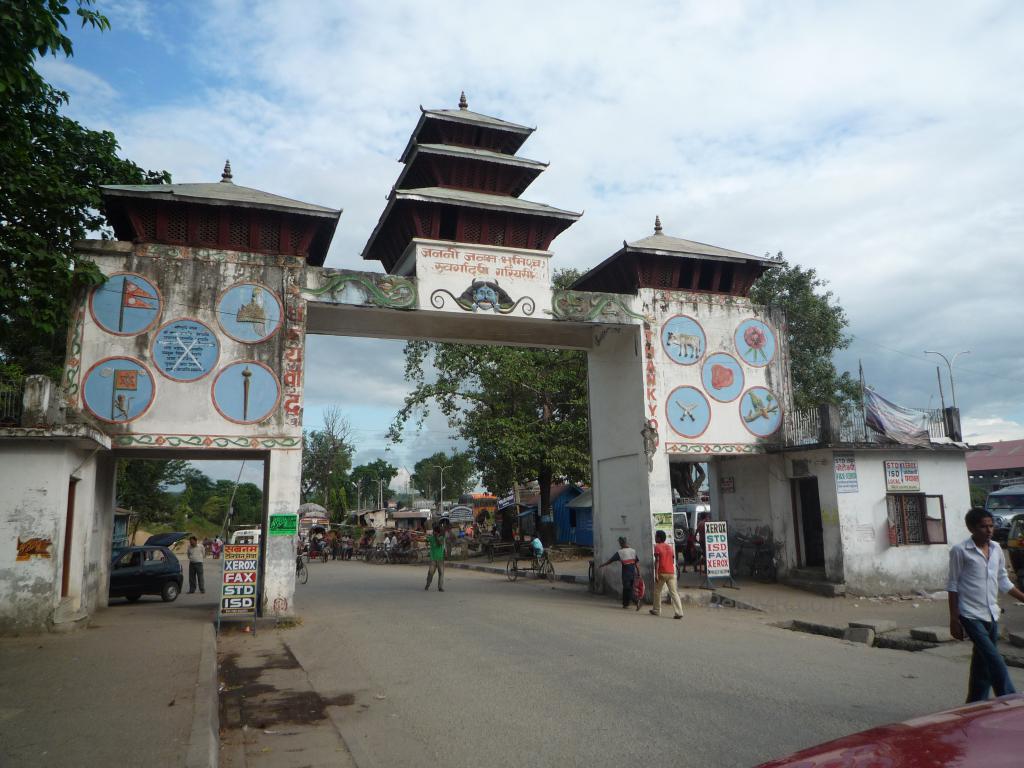 This is at the Nepal / India border. The week earlier I received my Indian visa from their Embassy in Kathmandu. That was the most frustrating experience I had thus far. The customer service was, wait, there was no customer service. It took me two eight hour long days just to get it. People were constantly barging to the front of the line demanding to be seen. They were assisted even though there was a clear queue system with electronic numbers. In the end they gave the wrong visa. I walked an hour home when I was finished and was still very upset from the experience. I went to bed early. I was fine in the morning.

I was reminded through that incident that I must be assertive and pushy at times. I have to adapt to the way things are in other countries and cannot expect it to be the same as I am used to. In this case, sometimes I also have to jump lines and push to the front. Things can be much slower in other countries and I have to try to accept it and adapt. 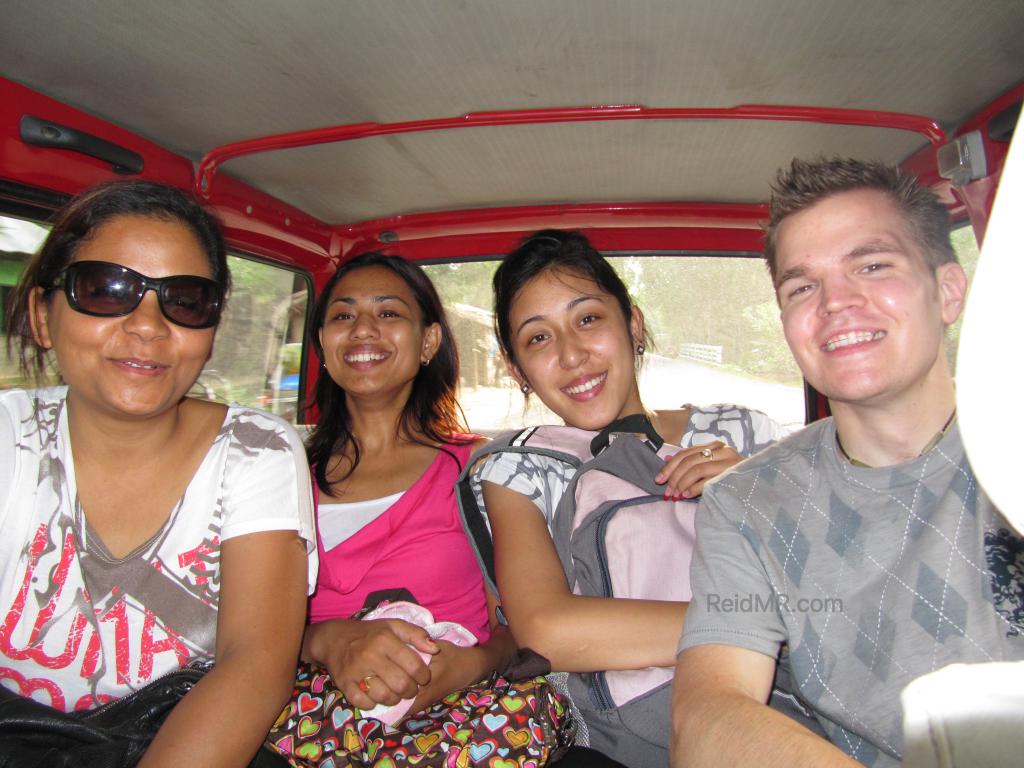 We hired a taxi to take us to Siliguri India. We packed in and enjoyed the ride. 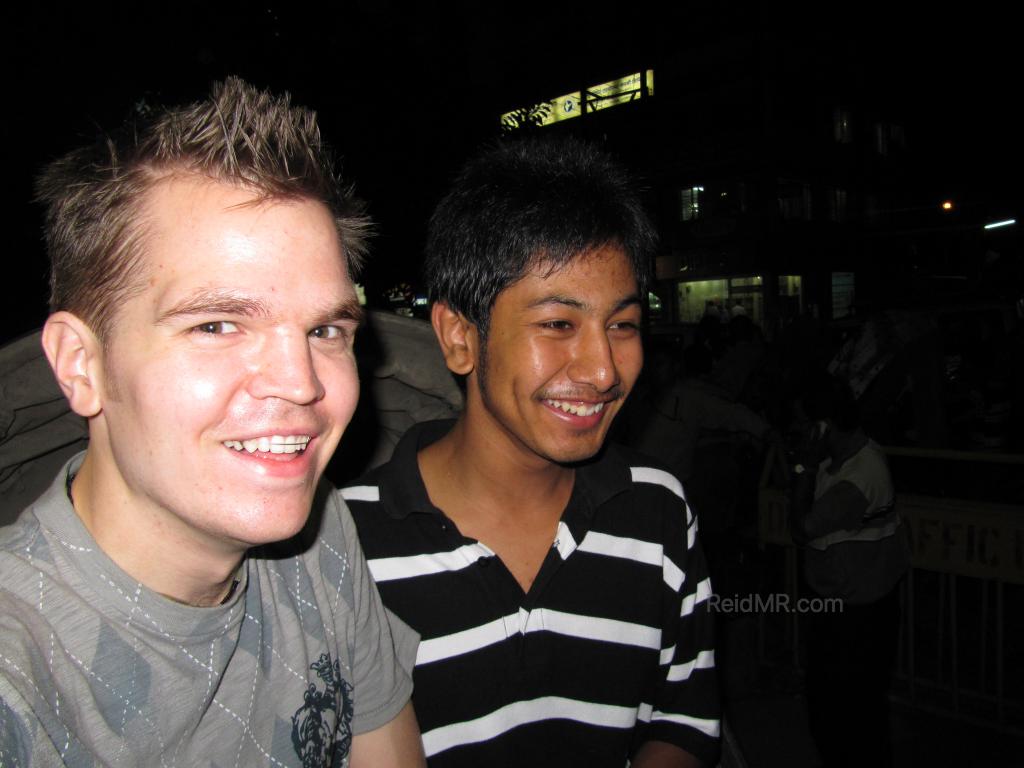 Rojesh never rode a rickshaw before. In Nepal they are unpopular and carry a negative stigma. In India he felt very self conscious and awkward. He eventually became used to it and enjoyed the rides. They are so inexpensive they become a very logical mode of transportation.

This was the first mosque I had been to. Rojesh and I were exploring for the day and went here. Before entering we had to cover our heads, remove our shoes and socks, and wash our feet. We both felt awkward going in. A friendly Muslim priest greeted us inside. He scooped a small dollop of grits in our hands. We politely tasted it, chatted, and left. We didn't like the grits so tried to casually wash it down the drain outside. The drain was plugged so it would not wash down. We washed our feet again because now they were dirty, and left. 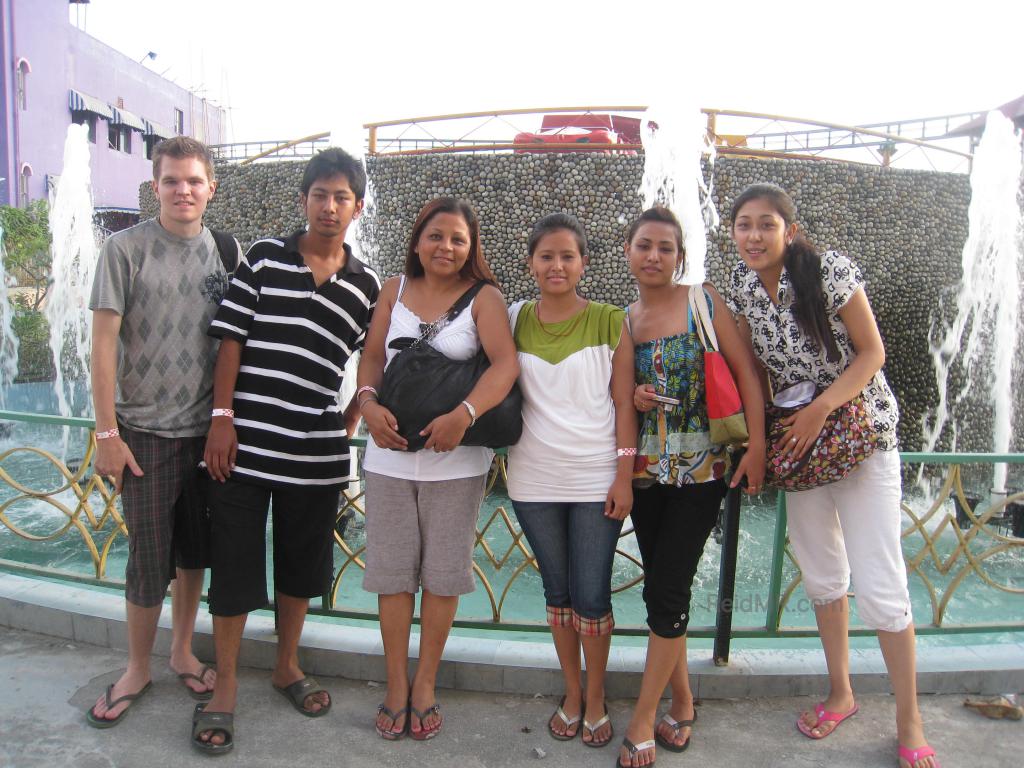 This was at an amusement park called Savin Kingdom. That night we all went here. It was during renovations and the low season. We were basically the only people there and had all of the rides to ourselves. 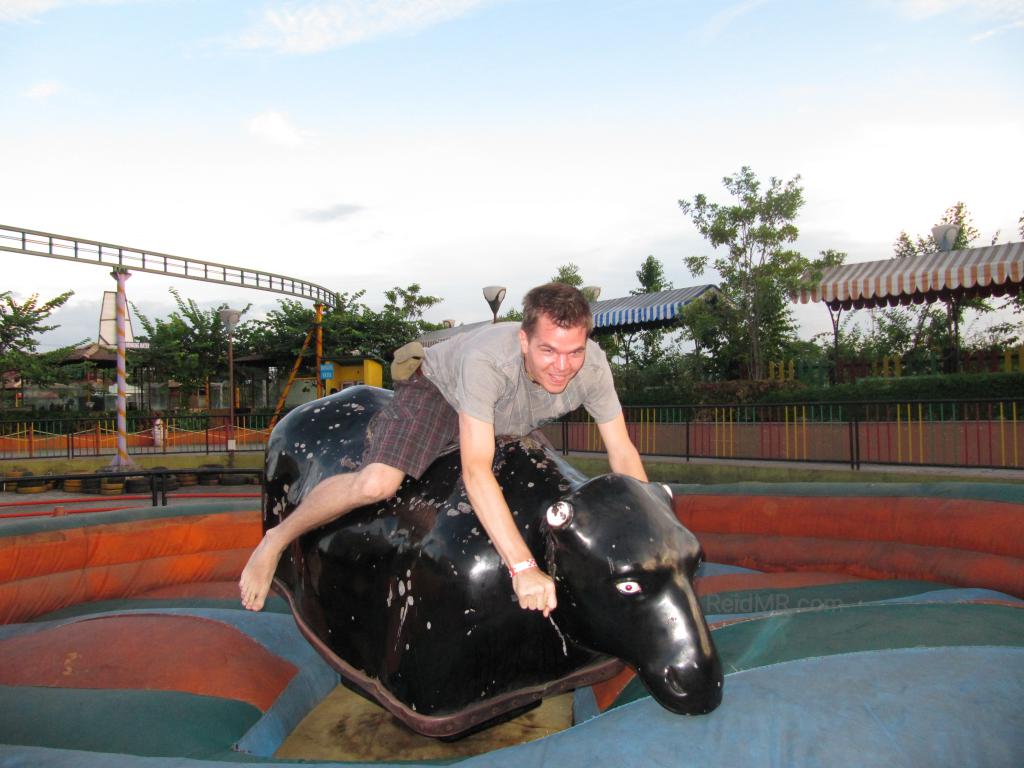 We tried to tame the bull to great laughs from the operator when he cranked it up to throw us off. 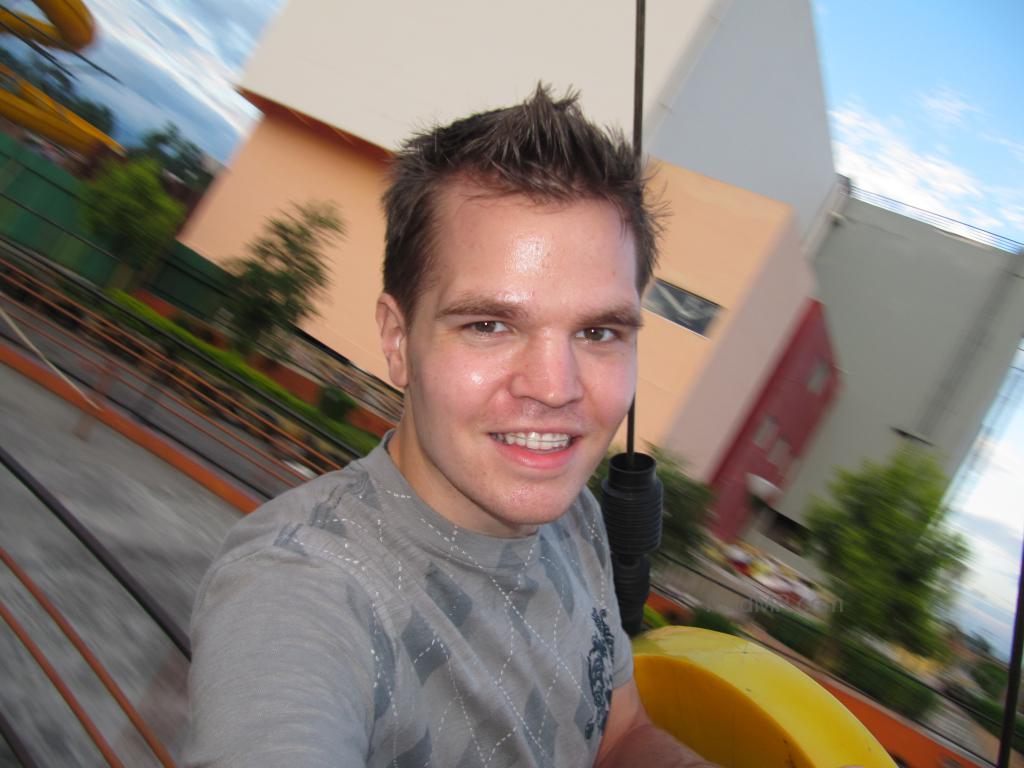 Likee was terrified on this swing! She held on like her life depended on it. With the suspect maintenance it may have. 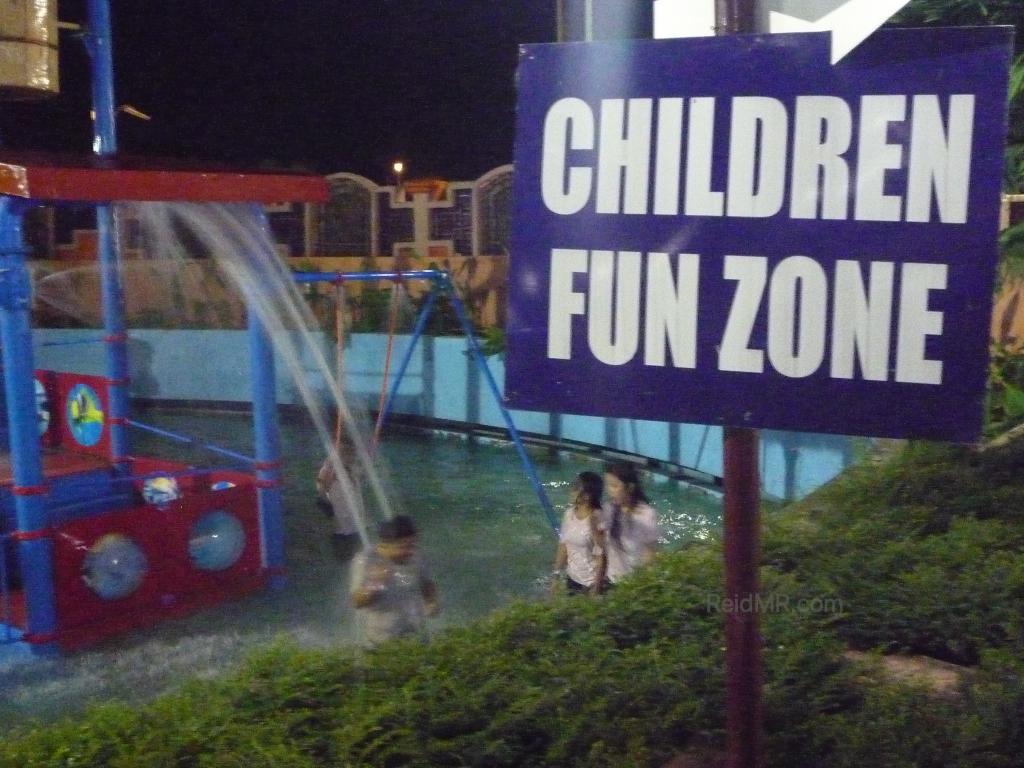 We went swimming in the evening and became kids again.

Highlight: Catching the inevitable third world bug, watching religion transform people, and going on a trip to a tea factory followed by a "safari".

Then the renown India bug hit. And it hit hard. The hardest I experienced in my life. I had to be on alert for a couple days and stay home to be near a toilet. By the time the sensation came it was too late. I had to waddle to the bathroom with my boxers already tainted trying to hold the rest in. As I started squatting over the squat toilet the rest would start flowing. And flow it did. The problem was that I was unable to aim while moving so it would spray everywhere. Down my legs, on the floor, and on the walls. This was not solid. It was more like brown liquid from the wrong hole. I was going through multiple pairs of boxers a day. Some of them I did not even want to clean up so I chucked them out the window onto someone else's roof. I was too irritable to care where they wound up figuring that by the time someone else found them the stench would have subsided. That was how the days were filled until that passed. Waiting for the sensation, not catching it in time, waddling to the restroom, and cleaning up the resulting mess. I started to plan ahead and would go even if I didn't feel the urge. This helped with the mess as most of the time there would still be a stream but it would be less violent.

One of the Days in Siliguri

In Siliguri we all went to a local Hindu Temple in the evening. It was very insightful to watch the body language and reaction of the others when we entered. The reactions were especially obvious in Urika and Rojesh. We were all tired by that time after a long day. This changed as we passed through the grand entrance into the temple. Their body language and mood transformed. As soon as we entered they became peppy, perky and full of energy. They had a light hop to their step. Their faces were excited. Urika gushed that when she comes here she knows there is a god. They were giddy and started to sing and dance along with everyone.

The concept about the deliberate and intentional ambiance created was confirmed. Places use certain smells, images, sounds, lighting, and other sensory details to instantly trigger a desired emotion and reaction due to a trained response to the stimuli. This works in any religion. The trigger becomes instantaneous and subconscious. We automatically react that way after years to decades of indoctrination. In a Christian religion they will typically use grand buildings with an organ playing in the background. The pews will be placed towards a pulpit. A cross, statue or other grand symbols are prominently displayed. The lighting in subdued. The congregation is singing. The leader is dressed differently to give a forced air of reverence and respect. We are supposed to feel insignificant and submissive in the grandeur. In the Hindu Temple the triggers were dim lighting, burning incense, congregants playing drums and instruments, grand art on the walls, large statutes, and leaders dressed in flowing richly colored cloth. As soon as the followers see, hear and smell the triggers they are instantly under the spell. It is fascinating to see that working and controlling the people susceptible to it. 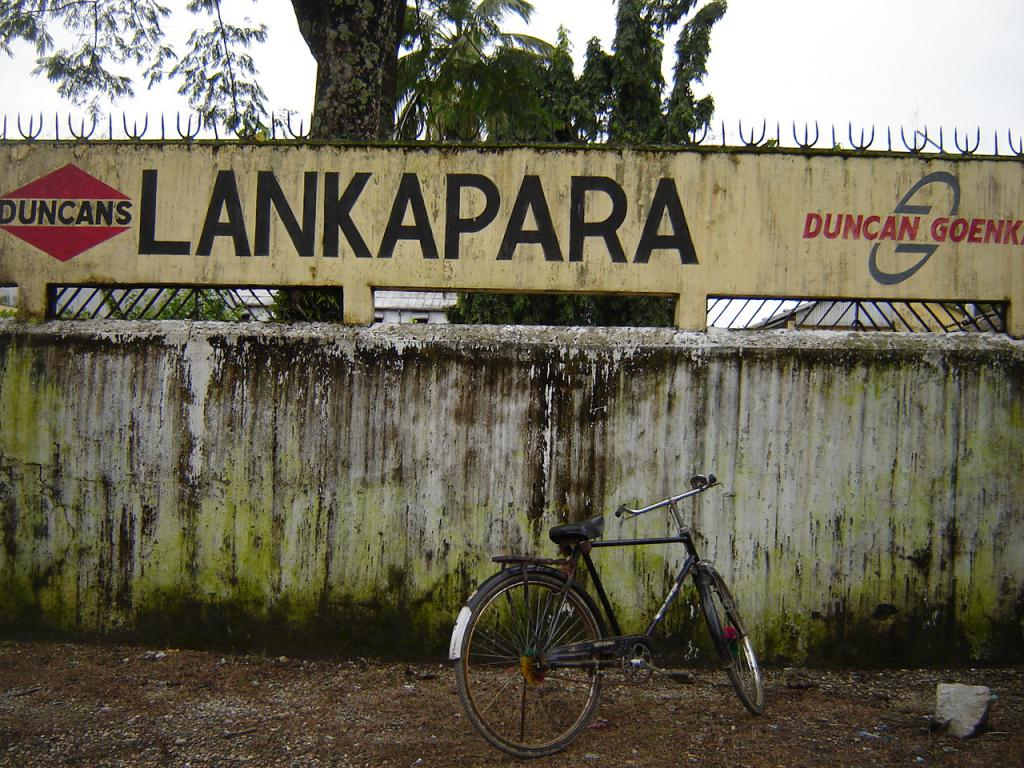 Likee brought us to another relatives home who own this tea factory. The tea is shipped worldwide. They provided a personal tour of the factory and gave us tea right off the line. It was delicious. So good, in fact, that Rojina's family drank it all by the time I returned a week later. 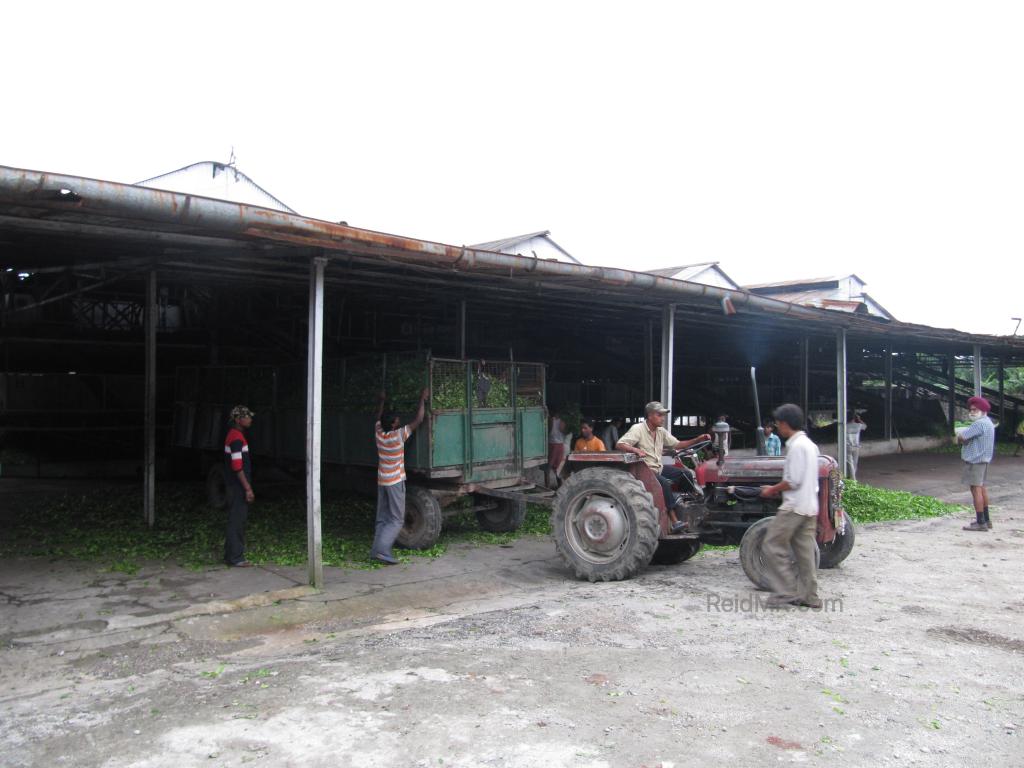 They have over 2,000 employees and produce thousands of kilograms of tea everyday. It starts in the field where they pluck the leaves off the tea shrubs. After a multi-step process it is mechanically sifted into multi kilogram sacks and shipped worldwide. 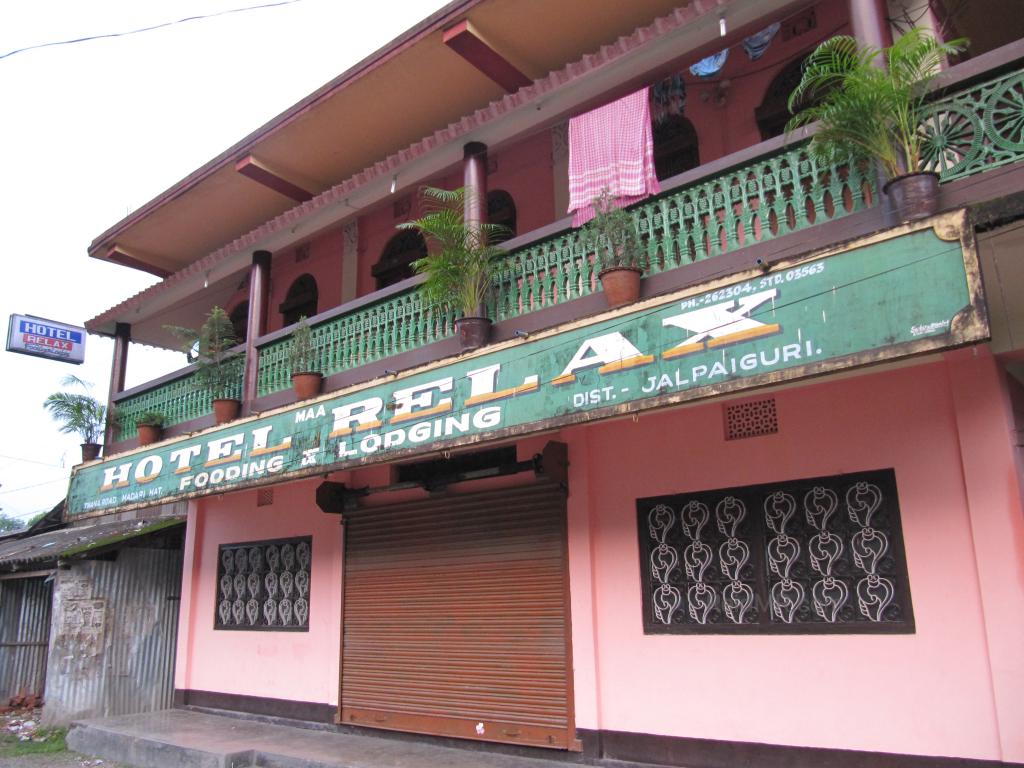 We stayed in Hotel Relax in Lankapara. We found out the name was anything but with the combination of mosquitoes that gave dozens of bumps, dirty sheets, and a bathroom that looked like a pack of wild hyena's with diarrhea ran through. I am still baffled about the name. We slept fully dressed and left as early as possible. 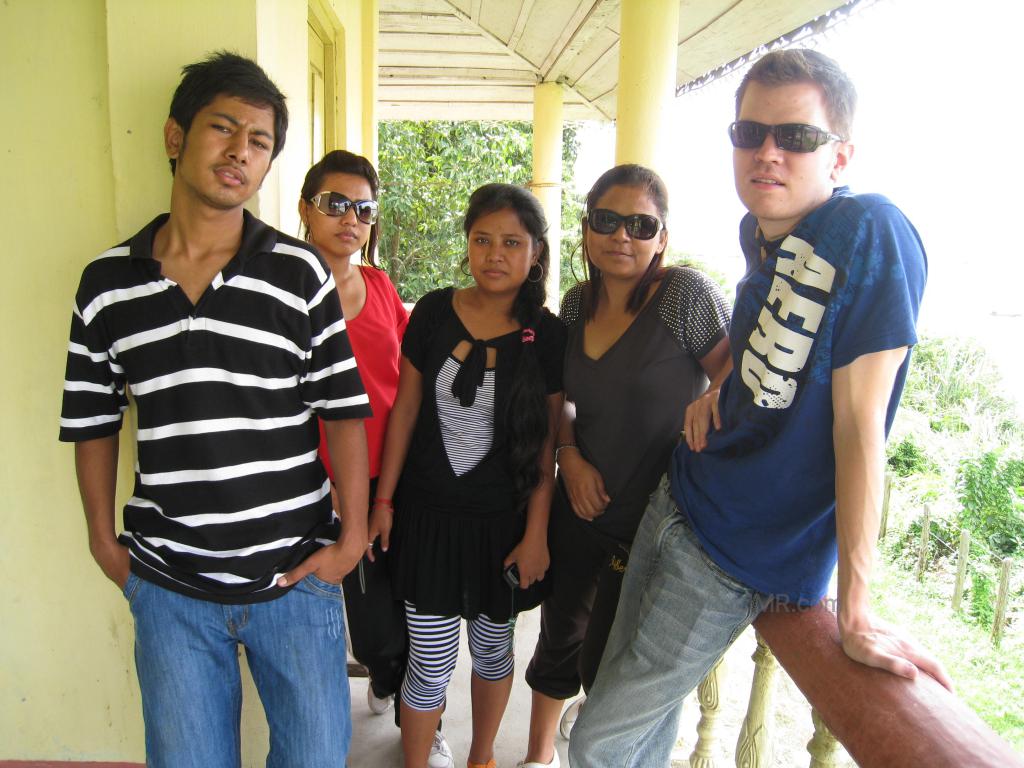 We went on a "safari". We saw a leech, monkey, other people, a domesticated elephant, and became stuck in the mud. The promises of the tour company were vastly exaggerated.

I was very irritated by that time. Pissed off actually. Everyone was upset. The Hotel Relax and "safari" experience were not something I ever wanted again. Someone else organized that trip when they should not have. I ate by myself sulking like a little kid. Being so frustrated I nearly returned to Siliguri alone. I decided to take the train even if no one else would. The rest of the gang decided that they would come with. We rode the train to Siliguri, 18 IRS, less than 50 US cents. This and the Visa experience were nearly tied as things I least want to repeat. 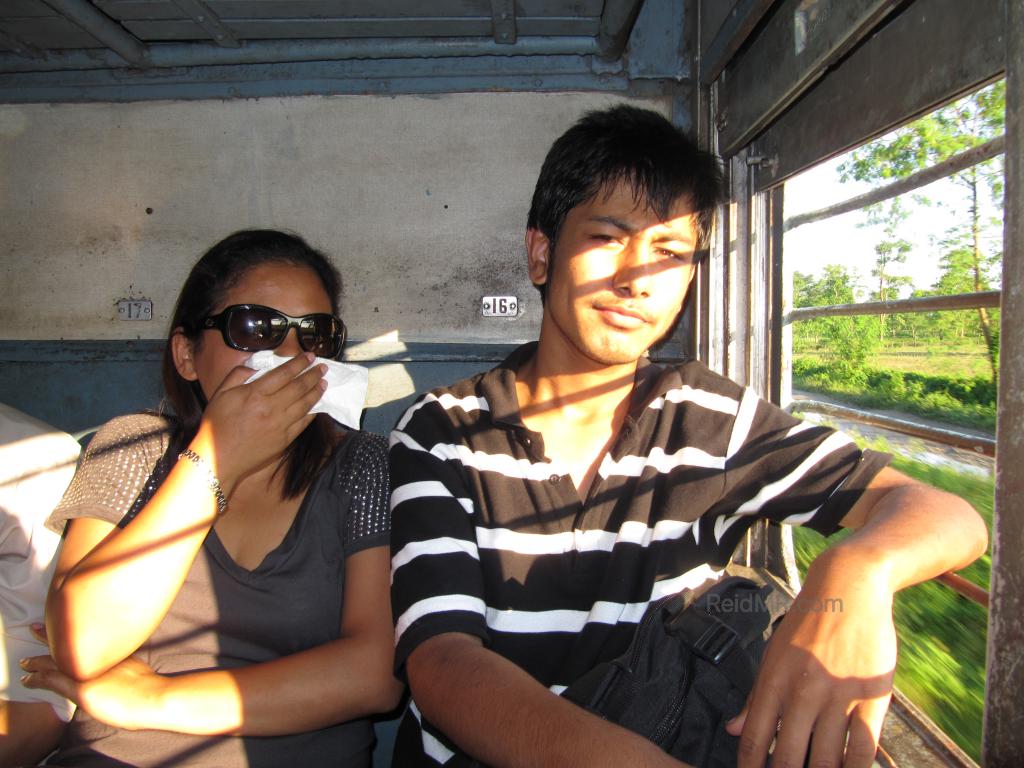 We boarded what was likely the lowest class train. One lady had her child pee in a bottle routinely, hence Likee plugging her nose. The train, if only for the experience, was okay. Nobody else liked it.

What I learned from this incident is that I should know what is going on and plan trips myself. Especially when the person taking charge is completely incompetent.

We continued to Darjeeling to stay for a couple weeks. We hired a SUV driver to cross the mountain. There was wonderful scenery on the way. At times it was very nerve wracking driving a unicorns breath from the edge of the road.

In Darjeeling Rojesh and I slept together. It was winter time and felt very cold without indoor heating. Our stack of blankets was ~10 centimeters (4 inches) thick. I considered cuddling up to him, but found that they were enough to stay warm.

One aunt made what a friend calls "Nepali donuts". They were made on the top of the house using a wood fueled fire heating a monster bowl of oil. The taste was amazing. I frequented the top to engorge myself until I could eat no more. 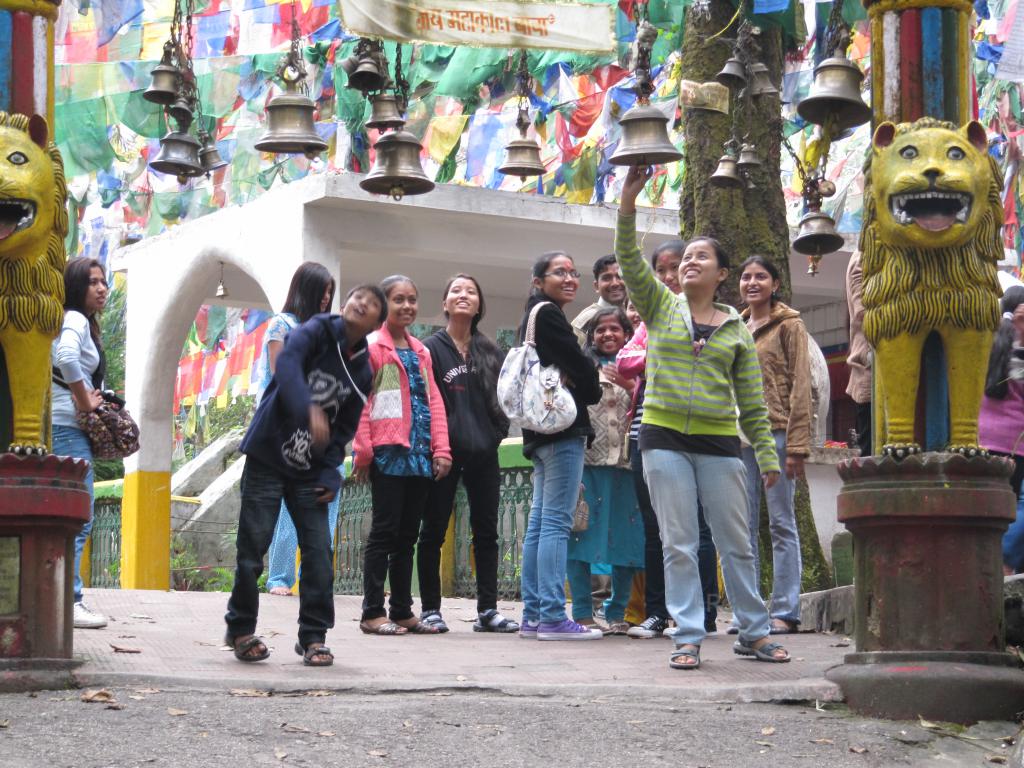 This was a temple in Darjeeling India. 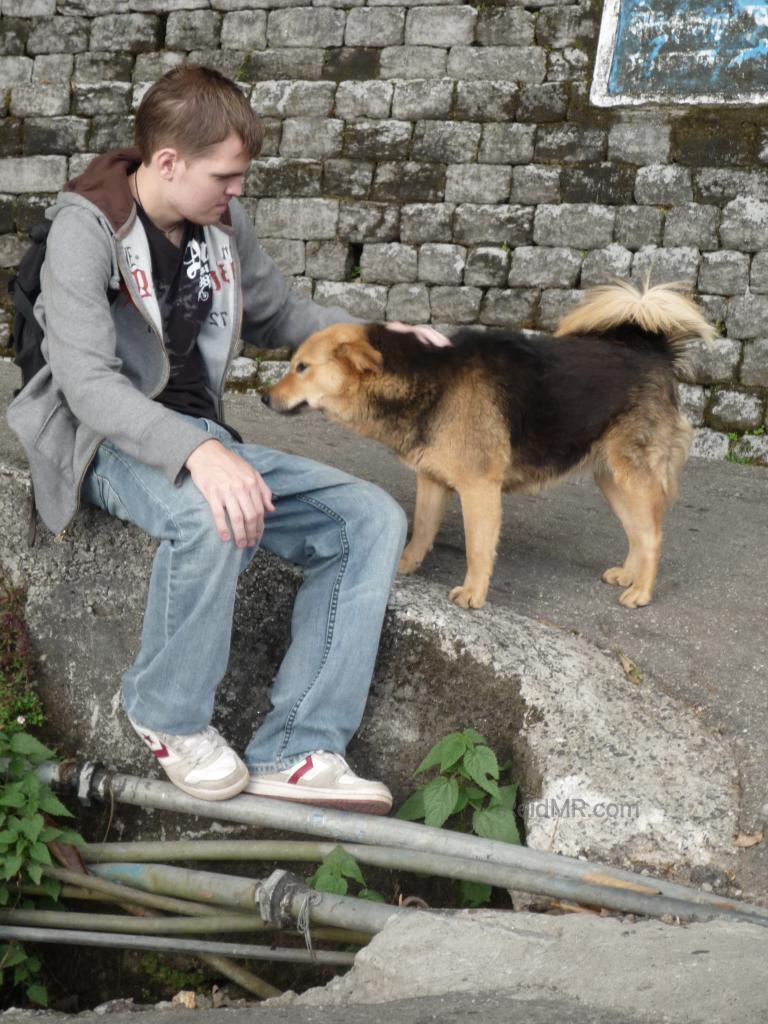 We went to see part of Darjeeling one day. A dog liked me. 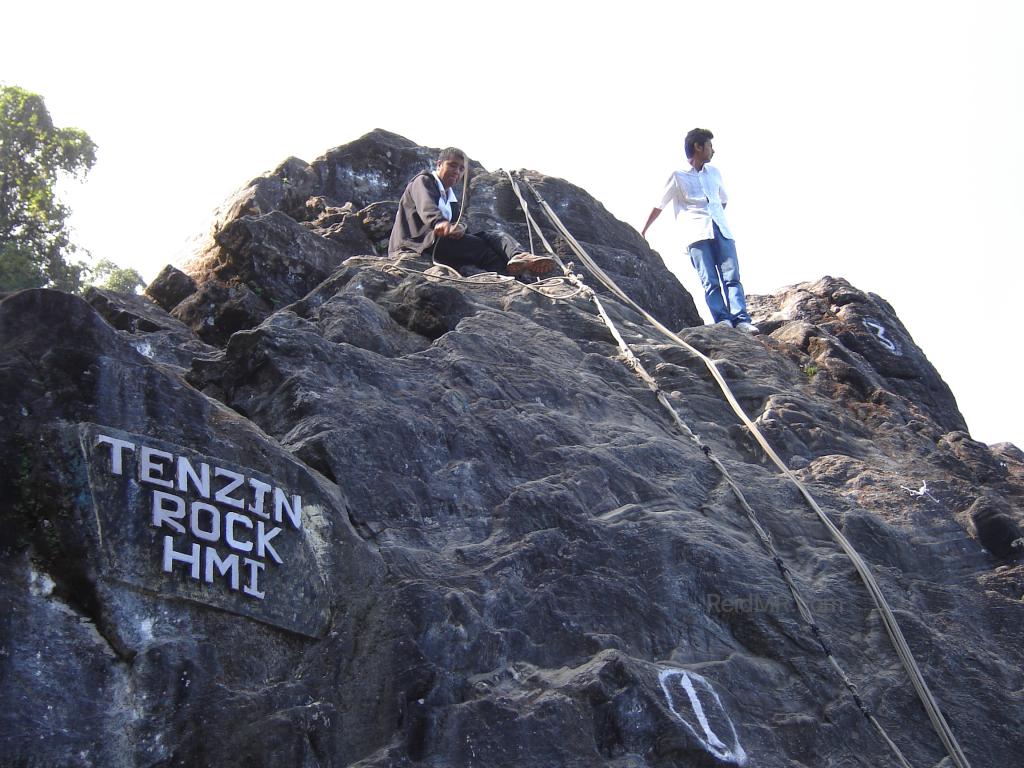 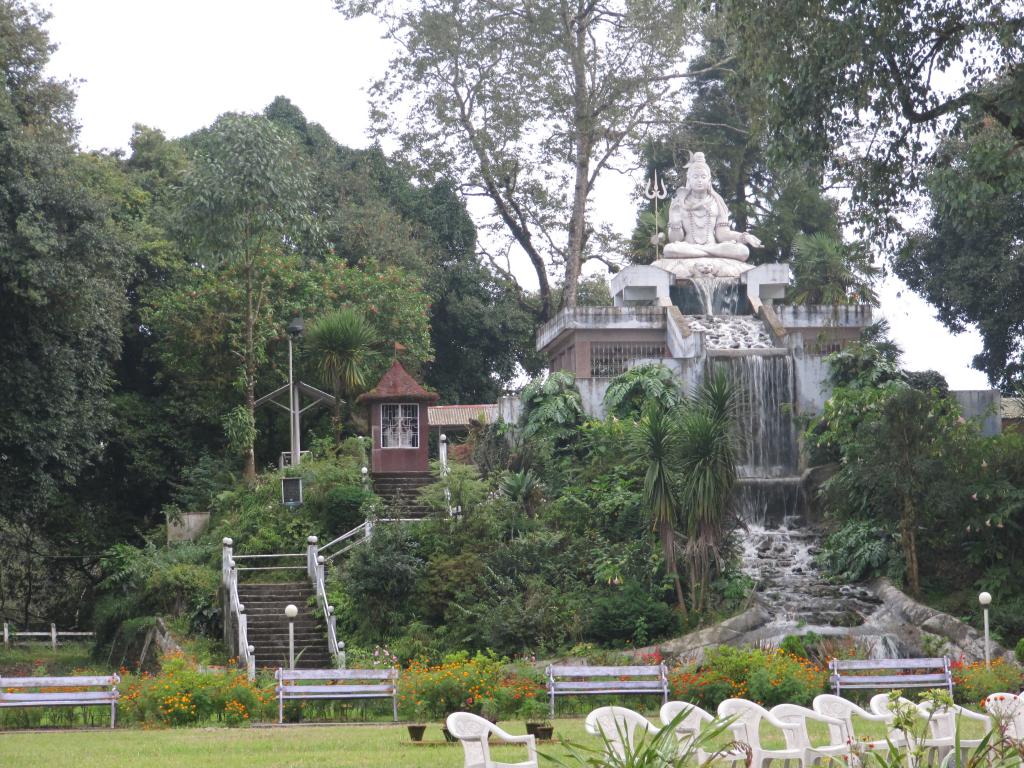 In the afternoon we visited a nice park at the top of a mountain. 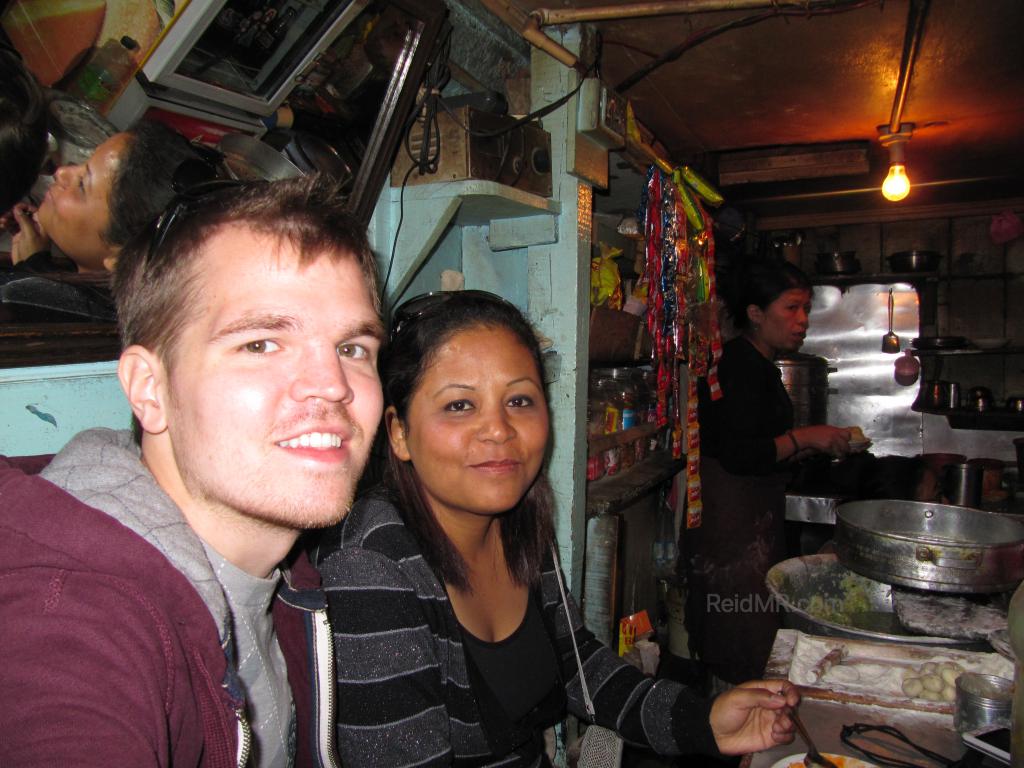 Likee and I ate at this homey and tasty restaurant. About eight people can sit here. By eight people I mean eight Indians. At most four Westerners would fit. 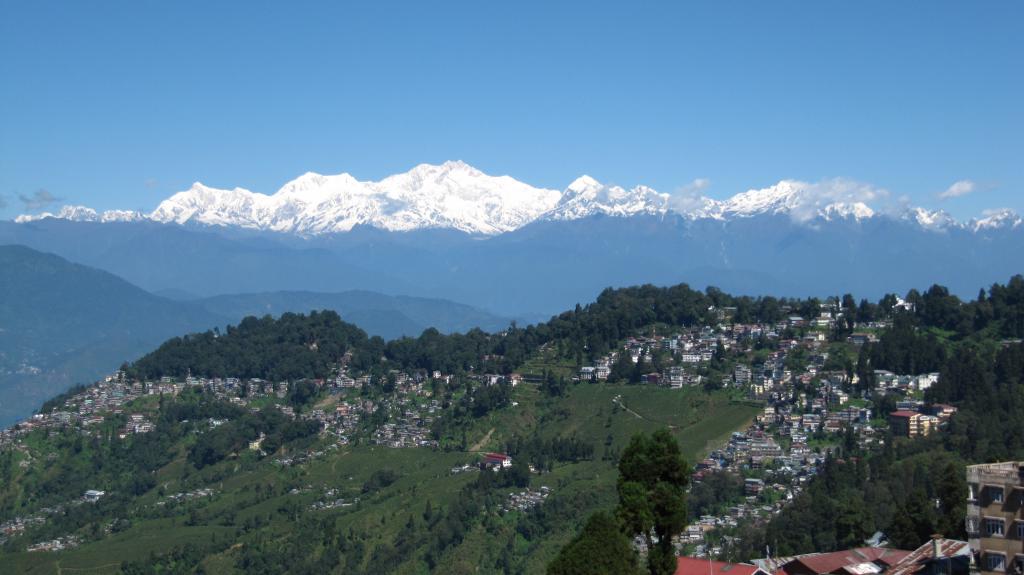 Mount Kanchenjunga, the third highest mountain in the world. 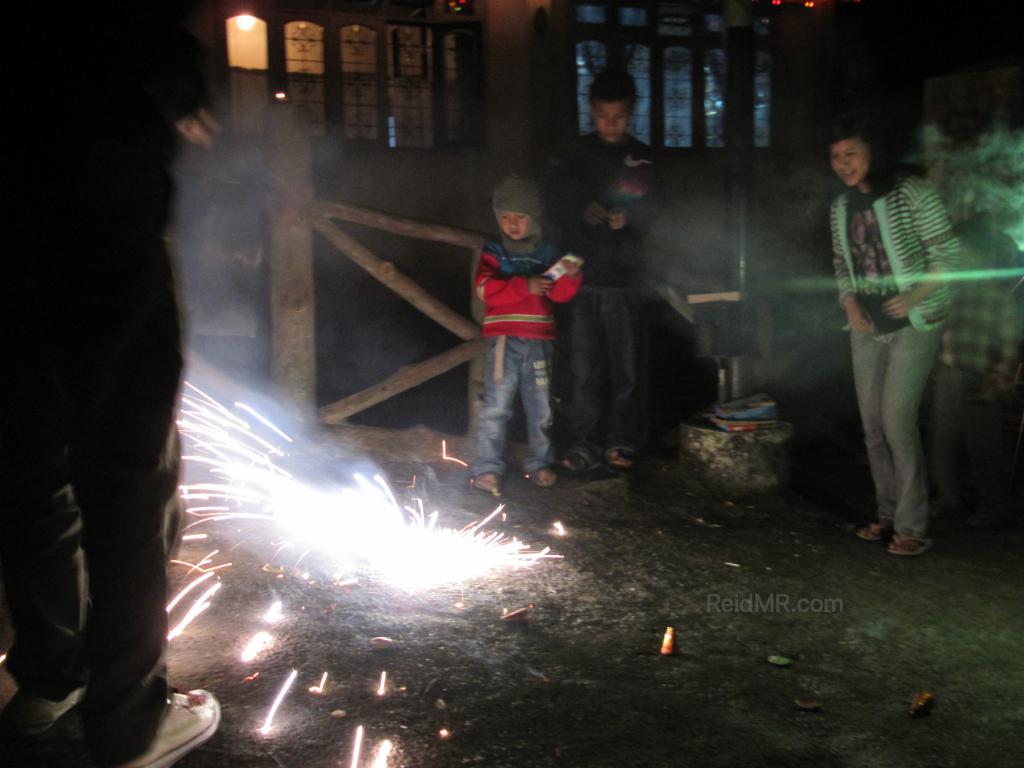 There was a festival called Tihar — festival of lights — at this time. Even little children would light fireworks and other small explosives. 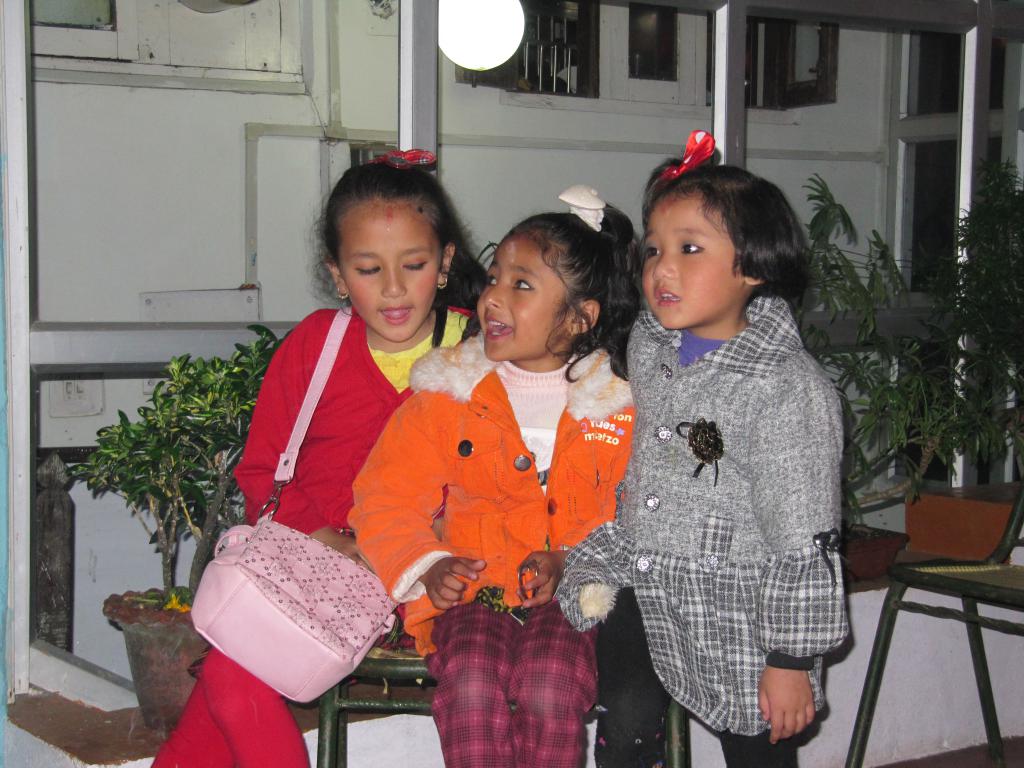 During Tihar people came to the homes to sing — to bless the home — and in return would receive money. They came for two to three nights. It reminded me of a different version of Halloween. 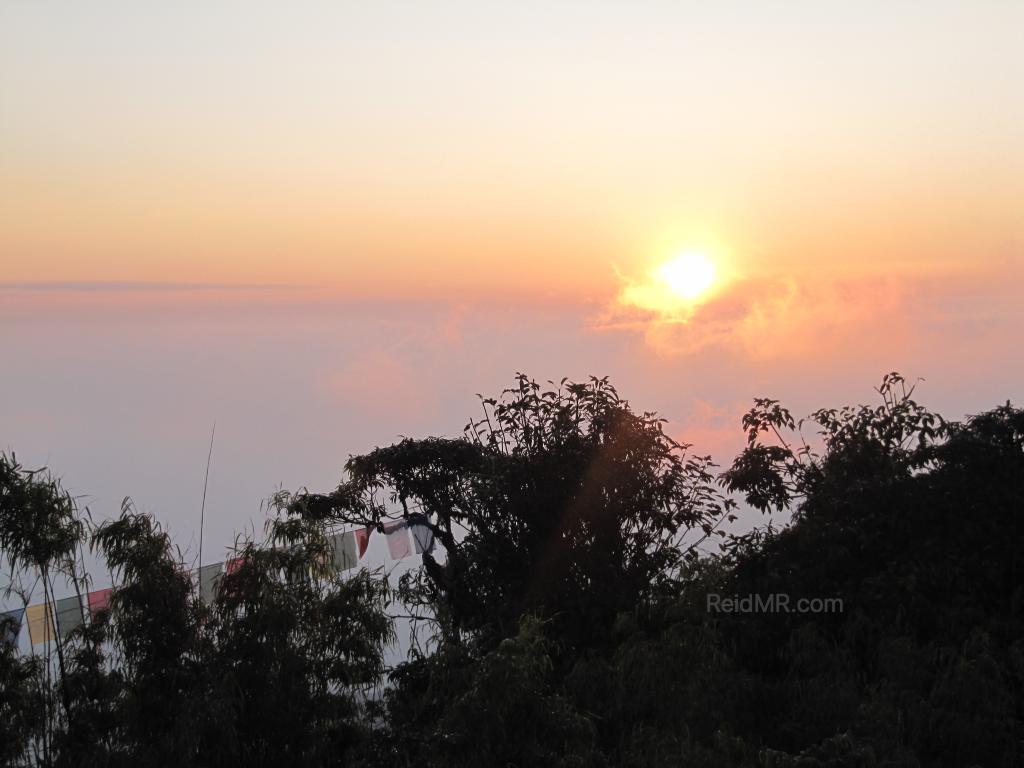 Likee and I journeyed to Tiger Hill to watch the sunrise. It was a popular area where hundreds to thousands of people came every morning. It was foggy that day but was still nice. The challenge was to find a place to watch it from. The least crowded area was by the restroom. It smelled like it had not been cleaned for years. The pungent smell was rancid from many meters (yards) away.

We returned to Nepal. At the border I contemplated hopping the border illegally so I could re-enter since they gave the wrong visa, a single entry, when they were supposed to give a multi-entry. After that I did not make the time to return to India so it did not matter.

I came from and returned to Nepal.